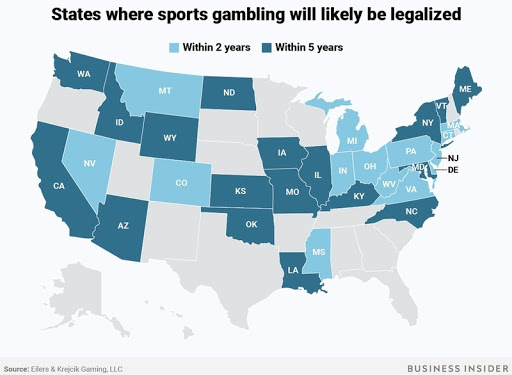 On Monday, the Supreme Court ruled that the Professional and Amateur Sports Protection Act (PASPA) is unconstitutional and opened the door for states to legalize sports gambling.
It is now up to the individual states to decide whether or not they want legalized sports betting within their borders. A few states, such as New Jersey and Pennsylvania, have already passed legislation and are expected to have sports betting soon.
According to a recent study by Eilers & Krejcik Gaming(via the AP), 32 states will likely have sports betting within five years, and of those, 14 would have some form of sports gambling within two years. These include a few states — Nevada, Montana, Delaware, and Oregon — where sports betting is already legal at some level, as PASPA grandfathered them when it was passed in 1992. Nevada is the only state that allows wagering on the outcomes of single games.
This map shows which states are likely to have legalized sports betting within five years.
Was this article helpful? Yes -0 No -0106 Posted by: 👨 Mario A. Mays